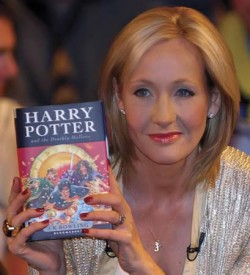 It is often assumed that salespeople need to be good talkers, and there may be some truth to that ( although good listeners are rarer, and usually more successful ). In an industry fought with rejection and disappointment however, there is a far more vital skill required – particularly in the formative stages of an agents career. The ability to face rejection and persevere without having it affect your countenance may be the most useful attribute and precursor to a successful career.We know of J.K Rowling as the author of the uber successful literary series Harry Potter. We know that she is one of the wealthiest entertainers in the world, and the first billionaire author. We know that the books that earned her accolades, spawned movies that made her millions, and theme parks that earned her millions more. A foray into a different genre of writing under the pseudonym Robert Galbraith brought modest critical acclaim, and even more modest sales until the true identity of the author was leaked. Sales rose by 4000 percent. She has, it would appear – the Midas touch. It was not always so. The first edition of the Harry Potter series was presented and rejected by the editors at twelve successive publishing houses. Had Ms. Rowling stopped at twelve, we would never have heard of her. In fact the thirteenth, though nice enough to publish her book, warned her not to quit her day job as there was no money to be made writing children’s books! While her writing has entertained millions of kids, mine included, perhaps the greatest lesson her story can impart has nothing to do with writing at all. Rather, the stick-to-it-iveness to the task at hand in the face of rejection should inspire. There are no shortage of similar examples.In 2009 Brian Acton, an unemployed software designer attended job interviews at both Twitter and Facebook, and was rejected by both. Unable to convince either social media giant that he could bring enough to the table to warrant a wage, Mr. Acton decided to go into business for himself. In February of this year less than 5 years removed from the unemployment line, Mr. Acton sold his start up -WhatsApp – for 19 billion dollars. The buyer? None other than Facebook. Had Mr. Acton believed Facebook and Twitter when they decided he was not worth a wage, he may never have persevered.On October 2nd, 1954, Jimmy Denny, then manager of the Grand Ole Opry in Nashville hired, then fired a new teenage performer after just one performance telling him, You ain’t going nowhere, son. You ought to go back to driving a truck. Fortunately, Elvis didn’t listen.Long before he became a regular in American living rooms with his hit sitcom Seinfeld, Jerry Seinfeld was an aspiring comedy writer and stand up comic. On his first attendance to an open-mic night at New York City’s To Catch a Rising Star, Seinfeld froze in front of the audience, and was eventually jeered off the stage. Unbowed, and confident in his abilities, he returned the next night -completed his routine to applause, and changed the course of his life forever.Rejection can be painful. Avoidance of pain is a natural human instinct. Yet what we lose when we stop trying might never be known. Of all the skills or attributes one could hope their children acquire, none will serve them as well as the ability to persevere in the face of disappointment.Thanks for reading,Jeff Neumann.